Someone who moves to an area can often bring new vision. I quickly noticed that the home-grown folks under-appreciated the old railroad, the Ro’ & Willie (Chapter 11), as well as the remnants of the station itself. Another word for “dilapidated” is “opportunity”!

Of course the railroad was defunct by the time Margie Keith’s father had to drive her to the Radford station. What a satisfying community project it will be to restore walls, roof, windows, benches, and ticket booth to their original prime condition! The building can be used for performances of old-time music, wedding receptions, mitzvas bar- and bat-, birthday parties, services for start-up churches, yoga classes, meetings (especially of the Historical Society)….

Can you imagine the pot-bellied stove heating those not already warm from dancing or downward-dogging? How about the romantic glow thrown by gaslights, re-fabricated by our own Crenshaw Lighting Company:

And the wall-mounted blackboard with its chalked notes as to schedules, on-times and lates–perfect for displaying the menu for a grill. This canteen would offer Steamers, the Ro’-burger with Coal Slaw, the Williewich, even a beer called De Rail. (The Chew-Chew Dog has been voted down by the committee.) As for the oversized clock, how many New Years will it mark as the ebony hands merge at the top and citizens whoop, hug, and blow plastic train-whistles? 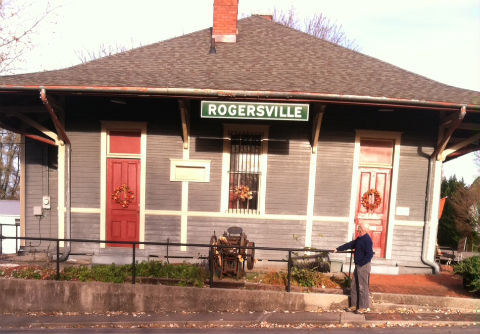 Restored station in Tennessee where Randall waits for a trackless locomotive.

Yes, the railroad must have been vital to Floyd County and, moreover, so early that its first locomotives not only heated their boilers with chestnut wood but also ran upon narrow-gauge wooden rails crafted from the same trees. It must have carried logs, lumber, and provisions, even the very people who founded the county. 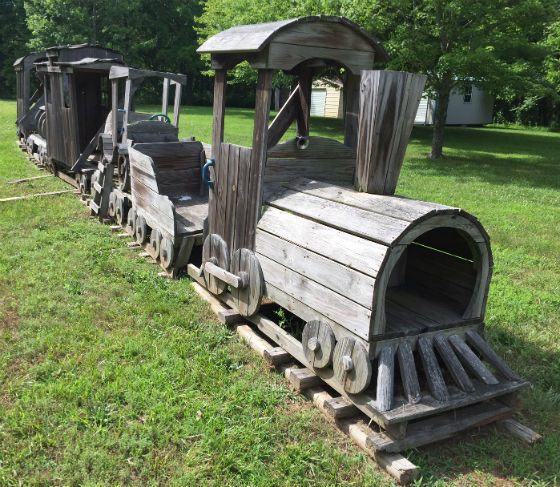 Wills Ridge Supply preserves what maya have been the ancient train next to Rt. 8.

Can you see them climb down–the Schlosser-Slushers, Poffs a-plenty, the Sowers-Conner-Belcher clans, a sprinkling of Vests, and of course the Q’berrys of various flavors? From another car step the progenitors of other tribes: Philipps, Sutphin, Martin, Hylton, Hollandsworth, Thompson, Huff, Harris, Cox, Conner, Belcher, Duncan, Harman, Shortt with long spelling…. Some haul their deerskin sacks as others hasten back to the livestock car to fetch chickens and a cow. A few unload heavy bags of sugar. And who are these folks with their tie-dyed garb—oh, the Patchoulis! Several carry a book by one Edgar Cayce.

And now descending to the platform is a long-bearded gentleman. He wears a denim overalls under a camouflage jacket, which on the left side bulges as if concealing an object. His cap bears the image of a pointed-green-leafed plant. As everyone on the platform stops to watch him respectfully, he tucks a Mason jar half-full of liquid under one arm and with the other holds aloft a Bible. With two fingers to spare, he forms a V and blesses the crowd in a slow half-circle. Why, it’s Floyd himself!

Of course the train originally continued on to Willis. In the photo below you can see a relic of what must have been the former right-of-way, for no one plants an RRX in the middle of a field.

I know that some call this project unfeasible or even undesirable. Some might object to government spending in a county whose unofficial motto is “Less tax, live max.” Some dare to contend that no railroad ever braved the steep, creek-incised, rocky Floyd– that even the famous locomotive I Think I Can would have just rolled back down the first mountain. But they confuse Can’t with Won’t, and their GPS is set on No rather than Go.

Why should communities up and down U.S. Rt. 11—Radford, Pulaski, Dublin—be the only ones to have antique depots? As an example of current efforts, the Virginian Railway Station in Roanoke is being restored in two stages to original appearance in 1909. And fired-up citizens of tiny Boone’s Mill on Rt. 220 are taking on a double challenge: securing the old depot from Norfolk & Southern Corp., and moving it from its original rail-side location to a potential historic district. (Zach Crizer, “Little town rolls up its sleeves,” The Roanoke Times, 21 Oct. 2013, pp. 1+.)

Is there a precedent right here in Floyd County? Apple Ridge Farm in Copper Hill, which offers a summer camp for children who live in public housing, has already brought in two cabooses that will be renovated for overnight accommodations. (Roger Mannon, “Train ventures off track,” The Floyd Press, 11 April 2013, p. A1+.)  And what more auspicious predecessor than the Locust St. Trolley (Chapter 8), which became its own station? Why should we not be able to declare, like the Stage Manager of Our Town, “Way back there is the railway station”

So Alll Aboard! Take your seat–window or aisle–on an adventure that will roll you to the past and the future! As a first step we merely need to locate the old station.