Why do Americans rank so low as to longevity compared to other industrialized countries? The National Institute of Health found that one reason was our dependence on cars—which in turn helps to create neighborhoods that discourage walking. (AARP Bulletin, March 2013). But it can be a challenge to find walkable places in Floyd County neighborhoods, where houses tend to be situated off narrow, busy roads, but residents can sometimes find them. One retired couple has done so. Sarah reports on the four-mile walk that she and Peter have enjoyed for six years; crossing through a scenic area, it starts at the junction of Moles Rd. SW and Thistle Hill Rd. NW in the vicinity of Daddy Rabbit’ Campground. The road is paved but the hills are challenging.

In 2000, Becky and Joe Pomponio read an article in The Washington Post about the county’s music and scenic charm. They visited in 2001 and felt that the town was a slice of Americana that few get to experience. Returning the next year, they decided to build a vacation home on a mountaintop in Willis. They became charter members of the whimsically named Floyd Yacht Club.

“What will Happen Today?”

We walk early in the morning, undeterred by weather. There is not much traffic on the road, where we are a familiar sight to most who travel it. We always draw a wave or a honk, and sometimes we may have a brief chat at the roadside.

The most unusual sight: we quite unexpectedly came face to face with a horse. He was walking with purpose down the middle of the road. We knew that this was a bad situation and, not equipped to handle it, we finally located a stranger who knew the animal. The three of us spent the whole morning on foot tracking the horse through the fields and up driveways. Finally he ran into a fenced-in area, where a bucket of oats convinced him to surrender. Months later, as we began our walk, we encountered a very large bull walking down the middle of the road. He did not seem interested in us and we decided not to engage him. However, we knew his owner, so it just took a phone call to end his dream of freedom.

One of the pleasures of our walk is interacting with our dog friends. They know us and we know them by name. Among our favorites is an elderly chocolate Lab; he sleeps on the front porch so we just yell his name as we walk by (he’s hard of hearing). Although he usually lifts his head and gives us a “wuff,” in his younger days he would walk out to greet us. Another dog is a little black one with long hair that covers her eyes and a plumey tail that stands up like a cheerleader’s pompom. She sits up on the hill and the minute she spots us, she comes running with barks of joy. She then walks with us all the way to the foot of Thistle Hill Road. She returns home by herself. It is a strange relationship as she will not let us touch her or give her treats. But we consider that we are friends and always look forward to seeing her at the two-mile mark.

Last spring, while beginning our hardest uphill climb, we saw a large box turtle beside the road. About a half-hour later as we were descending the hill, we saw her halfway up the hill and were surprised at how fast she had traveled. When we got closer we saw that she had dug a hole and was laying her eggs. We briefly paused to watch and then went on our way, feeling that she deserved her privacy. Apparently she lays her eggs and is gone, leaving the babes are on their own after they hatch.

We also have made some human friends while walking. A local retired couple also walks, so we often stop to chat. They are expert gardeners and he is a hunter who helps us with our garden issues. Although the crows were eating our apples off the trees and destroying our corn crop, a few dead ones hanging nearby discouraged them. He keeps these in a freezer and has many requests for them from local farmers. Our friends from “the city” were amazed at the sight of crows hanging from the trees.

Although our walking started as an effort to stay fit and healthy, it has turned into an important social event. When we first put foot on the road, we never know “What will happen today?” “Who or what will we see?”

“It is We who Trespass.”

Davy Crockett claimed to have killed more than one hundred black bears (Ursus americanus) in one year. While his boast cannot be confirmed, he was not alone in his determination to conquer these majestic animals. By 1900, the population of black bears, which only live in North America, had fallen from an estimated two million to 200,000, because of hunting and habitat destruction. In the area now designated as Shenandoah National Park, bears nearly disappeared.

Fortunately for the diversity of our ecosystem, black bear populations persisted west of the Allegheny Mountains, and those that migrated eastward may have been the great-great-grandparents of our Floyd County bears. Hunting restrictions have helped a lot. The North American black bear population now numbers about 900,000. Many of these bears are in Alaska and Canada. About 6,000 of them live in Virginia and I’ve met one or two on our land.

At the end of 2008, I joined my husband, Joseph, and our Cairn terriers, Dooney and Brady, in retiring to Willis. We have 25-acres on which Dooney likes to run. The other terrier, Brady, has adopted the role of lap dog and sticks close to home. Each dog is only about 18 inches long and weighs in at 26 pounds. The Wizard of Oz stars the most famous Cairn, Toto. As you can imagine, these are no mastiffs, but like Toto, what our dogs lack in size, they make up for in feistiness. Some would say Cairn terriers have Napoleon complexes. 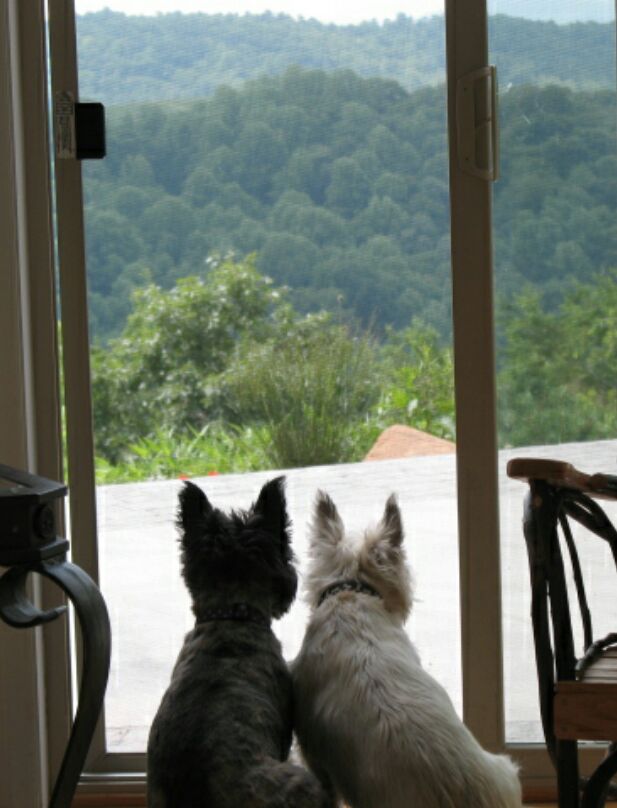 One sunny spring morning in 2009, we noticed that Dooney could be heard and not seen. He had disappeared halfway down the mountain behind our house and was barking wildly. There was another call we could not identify which sounded like a bleating sheep. I tramped down the mountain to retrieve the little terrier that always seemed to find trouble, whether it be a large tomcat or a skunk. Joe was hard at work in his garage restoring a muscle car, unaware of the barking.

As I pressed ahead with loyal Brady trailing behind, I came to a clearing: Dooney was nearly hoarse from barking up a tree. A young black bear was several feet above him, apparently crying out for its mother. The frightened offspring, which outweighed the dog by some 200 pounds, would bleat, and we’d hear a lower-pitched throaty answer in the distance.

I inhaled sharply. Dooney was directly under the cub, so I was afraid to rush forward and grab the loud dog, for fear the bear might drop down on the two of us. But the mother could arrive any second. Why the teen-aged Ursus, which was much larger than me, feared little Canis familiaris is anyone’s guess, but it was pitiful. Brady, realizing this was just too much fun to miss, did not stay back to protect me, but raced down the hill to join his pal in their new “Let’s Scare Boo-Boo” game.

I figured I needed reinforcement, so I ran screaming up the mountain, trying to get my husband’s attention. “Joe, Joe, bear, bear! Dooney has treed a bear! Joe, Joe!” I needn’t have bothered yelling because I reached Joe’s garage and found him calmly under the hood of a GTO, his ears covered by headphones, listening to his favorite rock songs. He looked up to see me gesturing wildly and finally took off the ear coverings. Stunned, he followed me as I ran back down the mountain.

I’d been gone less than five minutes, but now the poor cub had two determined little adversaries instead of one, trying to stretch their short bodies up the base of the tree, incessantly barking. I figured we didn’t have long before the mother came crashing through the brush to rescue her errant child. As we approached, Joe’s presence was apparently the tipping point. The climber leaped wide from the tree and raced away. Joe and I ran nearly as fast towards the dogs, picked them up and struggled hurriedly up the mountain for fear Momma might pursue us. Finally, far from the scene of the crime, we set the terriers down, thinking they’d follow us in their exhaustion, but they turned and raced down the mountain again, hoping to catch those intruders. What the little canines thought they’d do if they ever caught up to the enormous creatures is anyone’s guess. Luckily, the brush slowed them down and we scrambled and caught the pair again. The two-member family was luckily gone.

Four years after Dooney treed the black bear, we’d made sure the terrier now had his wandering days behind him. We were using the power of electronics to confine the dog to a large area on the mountaintop, where he could still chase insects and an occasional mole, but not escape to wreak havoc on larger wildlife. I, however, loved walking the trails to see how the forest changed from day to day and to get my exercise.

One evening, around dusk, I was rounding a curve near the front of the mountain, when I stopped abruptly. About fifteen feet ahead, stood an enormous adult black bear. Its ebony fur glistened in the remaining sunlight. Luckily, the animal did not seem to see me, but had its massive head down, eating acorns. Again…that intake of breath I’d felt before, seeing a bear so close in the wild. Could this be the same young animal we’d frightened four-years earlier?

I didn’t stick around to ask. Instead, I did a quick, quiet, back-step and then walked as fast as I could, glimpsing over my shoulder from time to time to return the way I came. The big animal did not follow me. I pulled out my cell phone and asked Joe in a shaky voice if he could come pick me up in the truck. This time he was not wearing headphones, and he roared down our driveway. I jumped in. We drove to where I’d seen the big bear, but there was no sign of him. I figured he had raced away as quickly as that teenager had.

I now clap my hands as I round blind curves on the trails near our home to let the bears know it’s time to skedaddle. I also carry an air horn that Joe found online just in case a bear does not run away quickly. No more sightings. I do find it comforting that in more than one hundred years (between 1900 and 2009), the deaths of only sixty-three people have been attributed to North American black bears.

We also have coyotes in our woods that we enjoy hearing at night. However, I’ve only caught a glimpse of a mother “song dog” and a pup off in the distance. Clapping and speaking loudly also gives flocks of wild turkeys notice to get out of the way of our dogs, when we walk them, leashed. All of these creatures seem exceedingly shy of humans and it is we who trespass on their quiet, watchful lives. But when it happens, it’s an honor that they let us glimpse them before slipping away into the green. Joe and I have changed our ways and likewise, we try to keep Dooney and Brady under control, to show some respect for the wildlife that shares Floyd County with us.