Accentuating the sometimes perplexing mixture that is Floyd, the county is a short drive from two anomalous institutions. First, a monastery lies just over the border near Copper Hill in Franklin County. If you drive north on the Parkway, look to the right at Mile Marker 145 to behold a stone-and-stucco edifice. A sort of Buckingham in the Blue Ridge, it calls to mind the structure in Lake Havasu City, Arizona, that was relocated from London after spanning the Thames. Syon Abbey houses a Benedictine fellowship that values self-sufficiency, privacy, and orthodoxy. Although the place draws no inspiration from Saints Ruth or Edgar, does it not have parallels with Floyd’s early alternative communities? Second, if you drive south on the Parkway to Meadows of Dan in Patrick County (Milepost 178), you near Primland, a retreat for the super-wealthy set not on 120 acres, or 1200, but 12,000. Floyd residents and their acquaintances are more likely to maintain its golf carts or give massages than to enjoy its refined dining, world class golf courses, and horseback riding. Any resemblance to colonists and natives lies strictly in the mind of the reader.

Once again the quarried castles of Virginia Tech enriched the life of the Wellses’ grandchild. Sidney got to attend The Intergalactic Nemesis: Target Earth, a science fiction show. The now-seven-year-old watched actors who stood before microphones and interpreted the words of a mystery story—as a thousand-plus pages of a graphic novel flashed upon a screen, as a pianist improvised, and as a sound-effects person scrambled among devices.

The university even spread its influence, literally, onto our acreage. Leftover food from its tables was composted by a Floyd County business and dumped in a great pile onto our yard. For a month I wheelbarrowed the stuff around, shoveling and scratching it into bare spots along with clover seeds in hopes of turning cafeteria-food into bee-treats. Poking out of the black soil were occasional fragments of plastic-ware along with fruit-stickers–tiny oval barcodes that might declare “Just picked yellow Jersey peach” or “MDSA Organic Orange Pepper Holland.”

And a parking permit for Radford University now hung from daughter Katie’s mirror. Adjunct Professor of Dance, landowner in Copper Hill, niece of the late Uncle Greg, and new mother of a From Here. 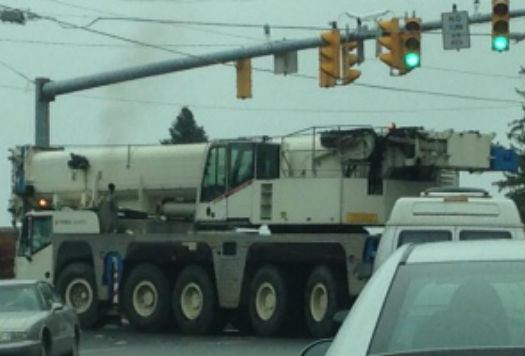 One way of passing time at The Stopligh is to remember the heart-shaped red lenses of Akureyri, Iceland. Another is to drum on the steering wheel in radio-rhythm, a practice, however, that might confuse a driver behind who is not listening to “Mountain Dew” on Back to the Blue Ridge, WVTF.

In an earlier chapter I also recommended composing words from the seven letters of FARMERS’. One day at home I accepted the challenge with pen, paper, and this set of rules.

Words with a minimum of three letters.
Contractions (“ma’m”).
Acronyms spoken as a word (“NATO,” “mrsa”).
Words formed by adding the suffix s to a noun (“ear-s”) or verb or verb (“hears”).

My total was about fifty with the help of “arfers,” by analogy with “woofers.” (The most voluble dog, King Arfer.) If anyone can surpass that numerical goal, Randall will donate $10 per word to Save our Station (the Ro’ & Willie project).

One night a family paraded against the green light while I waited and enjoyed their insouciance. In town I picked up a used hair-dye bonnet, surely a litter-winner. A friend complained about someone putting junk in her roadside mailbox, including a stocking, which she called a “sockument.”

At the Post Office the door-opening contest continued as to who could be nicest. I said to a diminutive elderly woman, “I’ll hold this second door open but you’ll have to get your own car door.” She stopped beneath my arm, reflected, then asked in a Northeastern accent: “You mean you won’t warm up my car seat either?” To one man who seemed physically challenged, I said “Looks like you’re still truckin’” “I won’t quit,” he replied, “till I close my eyes for good.” I asked another fellow about his hat, which read USS Missouri. “Never been in the service,” he allowed; “My nephew gave it to me.” “Like my Harvard sweatshirt,” I replied. Medical conditions were frequently shared and, in one case, political differences revealed. The day a former governor was found culpable for breaking a federal anti-corruption laws, one person said “I just don’t get it”; “Guilty!” declared a passerby.

One day as cold rain dotted my windshield, I saw Gannon as he negotiated the sidewalk. Turning off E. Main across his path, I offered him a ride. As we drove uphill toward Oxford St., I warned him not to reveal the existence of this secret alley, and he consented. Dropping him off at the Xpress Mart, I asked if there was a reason for wearing only a long-sleeved shirt in such weather. He thought for a moment: “Advance planning.”

Deer continued to be a nuisance and a hazard. “Go away!” accompanied the sound of Marge’s knuckles rapping on our upstairs window but produced only a slow, curious, perhaps tolerant turn of a deer’s ears. After visiting us, friends drove toward Michigan on Rt. 8—and almost into a large buck. The passenger had just detached her seatbelt to reach for something from the back seat and found herself slamming against the windshield.

An immutable feature was change. DEX, the company that rebuilt parts for Volvo trucks, hauled itself off. And the eschatological hearse seemed to have come to its end. Natasha’s Restaurant went the way of Brammer Meat Market and the shirt factory. The Courthouse District of the county voted to allow hard liquor. To abet that change, Randall stood outside the polls at the high school, a witness who remembered the perennial refusal of Metho-Baptist voters in the Myrtle Beach area to allow restaurants to sell mixed drinks on Sunday. 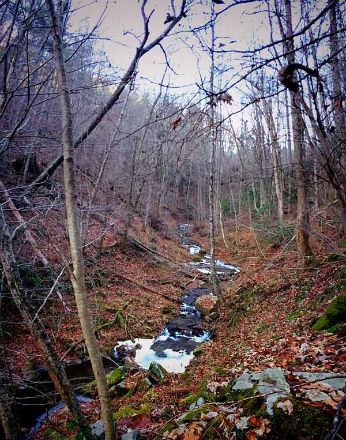 Winter arrived slowly as the Northern Hemisphere. Wearing the plane of the ecliptic like a collar, it tipped its head farther and farther backward from the sun. Located about 37 degrees north of the equator, Floyd County nearly shares a latitude with San Jose, California, so the winter days are appreciably longer than those in the author’s Chicago area, located five degrees up and over the cold, bare forehead of the sphere.

The season’s opening of the wood-stove was marked by a tortured groan of the door; the first oiling was celebrated by near-silence; but continued use brought a squeal pitched between G and G flat above middle C. On the highway, smoke an anonymous stovepipe, rising between the viewer and the sun, turned blue-gray. In front of the Courthouse, as I moved toward the stoplight in increments,  the hatted bust of the soldier was silhouetted in one upstairs window after another.

One frozen afternoon, driving from Roanoke on Rt. 221, I looked at a pond on the right and glimpsed a tangle of floating bare branches as it slid to the left and disappeared, a reflection-illusion of trees opposite the water. One night on that same road, as the car plunged down one hill even with Kings Store Rd., I peered a mile ahead to behold a cavalcade of headlights slanting down blackness as if from on high.

Over Thanksgiving, a snowfall, perfect timing for children from Charlotte. It extinguished electricity, however, for thousands of residents. Turkeys went onto refrigerated porches, folks into Hardee’s, repairmen to the hinterlands.

Marking the winter solstice, sunlight reached into the bottom corner of Woodhenge: 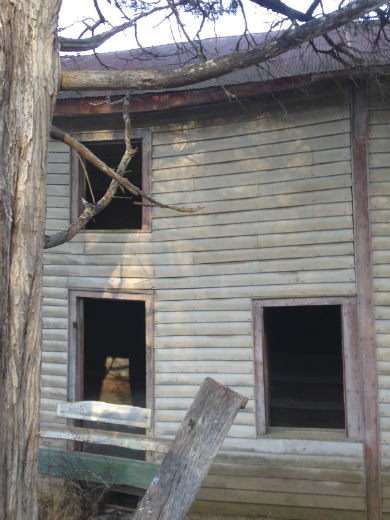 As the sun rose and inched along the southern horizon, it gleamed off the silver, conical top of the silo of the Jacksonville Center. Time for the annual crafts fair.

“I always love Winterfest,” writes Marjory–“cold and Christmasy!” This year the added fun was a miniature-tree auction.. In the new addition to the Jacksonville Center stood forty-plus trees in their own wonderland–each unique to the business that decorated it. One was a creation by School House Fabrics; it was decorated with reindeer, fabric hearts, angels of hemp, lace stars of burlap with red-button centers, plaid hearts, icicles of twisted fabric, and plaid bows and bells at the top.

A sleigh-load of gifts came from downtown Floyd. A jacket and hat from the Country Store as well as a CD by Anna Roberts-Gevalt and Elizabeth LaPrelle, two uncompromisingly-folk singers who sometimes perform at that venue. For grandchildren, high-quality games, jigsaw puzzles, a doll with separately-bought outfits, a Carhartt pony-shirt, and a rattle. The sophisticated Troika Gallery rendered up two sets of jewelry along with an elegant cup inscribed Granatelli. Across the hall at Monkey Business we bought a skirt for our daughter, and her son picked out her socks. At the Community Market we snapped up a blue-glazed pitcher for her family (made by the potter in the white apron). We also hit the nearby Red Rooster Coffee Roaster for a pound of Christmas-blend beans, and across the street at the Republic of Floyd, Marge bought me a four-pack of Belgian beer. Not the same downtown as the flour-barreled place of yesteryear.

As we drove toward Copper Hill and our daughter’s house, the wind essayed to steal the branches from a large fir, which wrestled around to keep them. Katherine gave her dad a small, knitted rooster from Harvest Moon.

Colors hang on in  December

On our way home, something bulked up in my rear-view mirror on a 35-mph curve. At the blinking of my emergency lights, the driver backed off a little, then rushed forward at the next curve. I pulled off and he disappeared up Rt. 221–no doubt inspired by “Haste, haste to bring Him laud.” That evening we hosted a dinner for four pals: in Floyd County fashion, two originally from Alabama, one Florida, and one North Carolina. Marge gave both women a peacock feather from Finder’s Keepers, and as the wood-stove flickered orange and the wine poured red, Fred drew admiring laughter with his imitation of the Chipmunks.

As the sun disappeared over a hill about 5 p.m., it reflected off something in the opposite direction–on Storkers Knob, I inferred. With binoculars I tried to identify the source of the bounce but instead witnessed a Christmas-card star, with four extended points, even with rainbow-lights on the horizontal bars closer in. Adding to the mystery, I couldn’t help noting a hint of the cross. As the guests were leaving, we connected the dots of Orion, who seemed to be watching over the spot where the sun had risen that day, perhaps hoping to warm himself just after dawn. 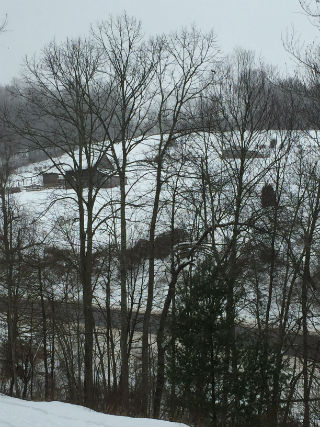 Winter slices between hills on Rt. 221.

Floydiana is reluctant, but obliged, to report all the truth, however dismaying.. One December day in 2016, a pickup driven by a young man turned left from S. Locust onto W. Main; it collided with a pedestrian, who soon crossed to heaven. Tragedy was tinged with irony, for the woman had often written about civic topics in a newspaper column. Eventually the dark rubber skid-marks would wear off like the pedestrian lines, and the young man would be arrested, but the intersection would forever be a memorial.

Sky-flakes now piled an inch of white on the Confederate statue’s hat-brim. They also obscured the book-pages of the angel who sat reading near Epperly Mill Rd. Onto the stones of the Ed Strong mill they twirled, and onto the already-cold marble of the family burial-ground. They blurred the rocks of the wall constructed by Mr. Thompson and upholstered the planks set over Goose Creek Run. Stumps disappeared–the hemlock of the Coartneys’ and the mushroom-stump lumber-maker of Chantilly Farm. Flakes twirled unmelted into the cold chimneys along Penn Rd. beside Rt. 8, and of the abandoned Saddle-cabin. Onto the terra cotta head of Buddha they descended, turning his curls white, as befits a personage of 2500 years of age. Spring was envisioned only by the calendar.