After getting a whiff of diesel exhaust from a passing truck, members begin the second half the tour at Farmers’ Supply.

Enjoy the slight give of the floorboards as we poke along the narrow aisles. This iconic business holds a hundred items for every person in the county, and in the attic it even stores a batch of unadvertised Confederate flags, one of which our friends from Colorado purchased for their hopeful grandson. You might buy a few souvenirs or else some necessities: screws 1/2 X 3, 1/2 X 4, locknut nylon 1/2, screws 1/2 X 3 hex cap…. 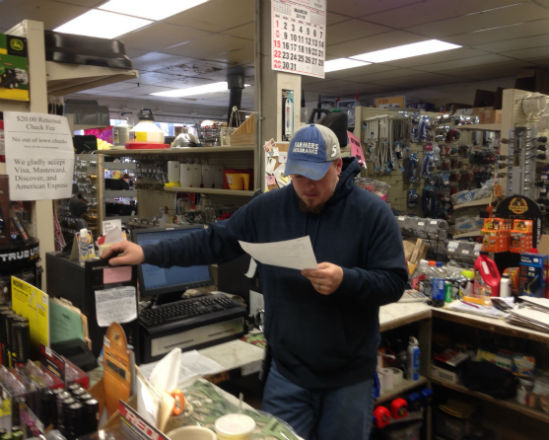 Joe in Itemland, calendar turned to March 2015. He explained that the windows were barred to the basement because it used to hold dynamite.

Opening the door to the inside, dodging the wheelbarrows and tricycles on the sidewalk, we turn left onto the corner of Main and Locust. (The be-stapled telephone pole decorates the previous chapter. Taking another left on the sidewalk, we soon pass the stairway of Black Water Loft and come to a timber-frame shelter that houses the Community Market. Dedicated in 2009, it is a 3,000 square-foot pavilion. One of the regular vendors is Tree Gigante, also photographed in Portrait of Floyd, Virginia: 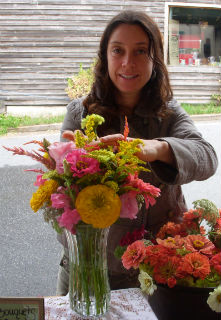 One of her glass vases rested atop our wood-stove to soak up light from outdoors, even on a cloudy day, and transform it to luminous orange.

During Virginia’s Blue Ridge Music Festival in 2013, a quartet of woodwinds–oboe, bassoon, clarinet and flute—played “Golliwogg’s Cakewalk,” by Debussy, as a blond child in pink shorts improvised a dance. Then to “Entrance of the Gladiators,” by Fučik, she twirled, jumped, and extended a leg backwards theatrically. An earlier time during that ten-day-long event, fourteen musicians played against a background of the rear of buildings on E. Main St.–unadorned, weathered recesses. In front of the group, a portly man in overalls and tattoos stood with his back to them and looked over a table that displayed his own art: hand-turned bowls. He nodded his head, backwards-capped, in time to the music as his beard glowed ethereal. 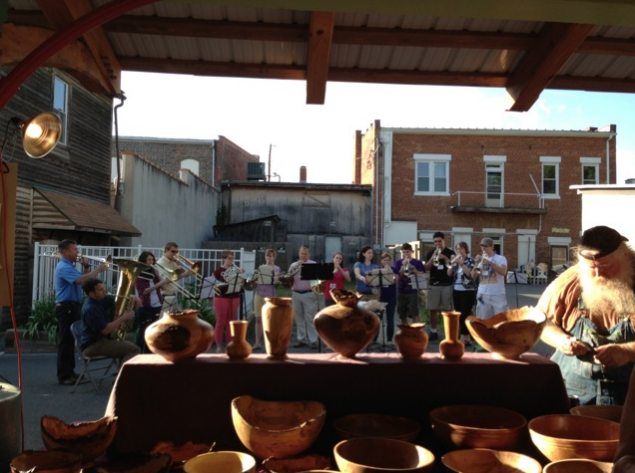 S. Locust St. makes a picturesque arc through the downtown between a small, shabby trailer park and the Winter Sun building with its roll-top roof and flaming frieze, ironic since the original shirt factory partly burned.

Across the street from the Community Market stands the pleasantly ramshackle Angel in the Attic, a thrift shop. Operated by volunteers, it turns its multitude of minuscule profits back to worthy organizations. For the author, an armload of used clothing, do-dads, a cow outfit, and even a curtain once served as costumes for children. Grandpa even picked up a VHS of Felix the Cat In the adjoining boutique of nicer items, and Marge and I bought an elegant, furry mandala for Katie: “It’s so me!” For our daughter’s equinoctial ceremony she bought a half-dozen baskets to hold symbolic vegetation. A fair number of people volunteer at the Attic, so it has a double or triple community effect. In 2014 Ralph Roe offered an example: “This year, our lawn maintenance guy volunteered his labor for painting the dock, and I provided the paint from Farmers Supply. Mission accomplished!” Only a few items are rusty, like the tool below:

Have box saw, will cut molding. By permission Elizabeth Whitlock, 2015.

A bit southward on the other side of Locust is the new Warren G. Lineberry Memorial Park, a couple of acres that slope down to a hollow in the middle. The formerly abandoned land had earlier been the site of a livery stable and part of a small farm. On May 20, 2013 a few of us enjoyed a view of the park from the porch of Dogtown Pizza/Sun Music Hall. Across the grass stood the Pickin’ Porch, constructed by the musicians Mac and Jenny Traynham. Its trellis of thick rhododendron stems was a second try, for although she had piled the first batch nearby after laboriously gathering it on a mountainside, it was carted away as trash.

We were privileged to hear the first official sounds from the shelter-bandshell down the slope. This edifice had been partly funded by music—i.e., by three or four benefit concerts of Bluegrass and Old Time Mountain that always included the Traynhams. 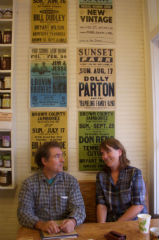 Mac and Jenny Traynham at the Floyd Country Store, 2011. Photo by author.

Through bright green locust leaves we could make out several players from Virginia’s Blue Ridge Music Festival. Since the Wellses were members of Partnership for Floyd, the organization that developed the land along with the Town of Floyd, and since Randall was a board member of the Music Festival, the first strains of music brought almost enough appreciation to drop salt in his beer.

Below on the hillside, shadows slanted from the west in Floyd’s own version of A Sunday Afternoon on the Island of La Grande Jatte. Each person was visible on the grass or the terrace: some rested on a bench, others sat or stood on the grass, alone or in a cluster. Children wandered, some with their arms behind them, others knelt or lay down, and one rolled lengthwise to Sousa. Clapping could be heard from a Friday night performance on the sidewalk nearby: “First brass,” observed one person, “then Bluegrass.” In the lee of the declining light it was the “magic time of day,” as artists call it (theory shared by Carolyn Deck, teacher of my “Colors” sessions at the JAX). Each person made a distinct figure, some as cutouts from black cloth, others in hues solid or striped that seemed vividly saturated, as if the pigments, not the sun, emitted light.

Other park scenes followed over the months. A boy ran at the stone wall beneath the sidewalk, landed a tennis shoe on it, then another, and somehow grabbed the rail and pulled himself over. Runners mingled there after a 5K race, waiting to hear the names of winners. A club of ebullient teens carried a beach raft to the grass and took turns having their photo taken upon it. One Sunday afternoon, on the patio, a woman lay sunning in a motorized wheelchair turned into a chaise-longue.

Down the grass Katie led an autumn ceremony. In a brief talk she invited participants to find balance just like day and night, and then she drew symbolic vegetation from baskets, whatever was left after toddlers had done some strewing. At one point a massive arm crossed in front of me, reached over to the neck of a kitten and as I stared wide-eyed, scratched it gently: one of the drummers, Nii Anang, Ghana’s loss (Chapter 49). The circle welcomed Gannon, who hobbled over in his latest cool bandanna, which raked across his former eye. He sat out the fast-weaving-circle-dances as hands beat drumheads energetically.

Farther uphill on Rt. 8, past the cemetery, final resting place of the Nolen brothers and their two arms, stands the Jacksonville Center for the Arts, a title that honors the earlier name of Floyd town. (Fondly abbreviated as “The Jax,” it would be changed to the Floyd Center for the Arts in 2016.) A repurposed dairy barn complete with silos, it is complex of white shapes that can be glimpsed from the Wellses’ house across the valley. It includes offices, a gallery, sales rooms, a performance space, studios, and lesson rooms for music and art. The place is emblematic of the county’s agri-artistic culture and its perennial dearth of funds. Randall has taken guitar, banjo, and drawing lessons there; Marjory has taken classes in jewelry-making, shibori technique,,,,, and wood-turning (conducted off-site by none other than sharpshooter Dennis).

One day seven Subarus were the only vehicles in this parking lot, and when one departed, another arrived. And why was a painter loading cement blocks into the back of her SUV, for what kind of artistic purpose could they serve? “I have a show in Roanoke and need something to anchor my tent.” As we enter the big room upstairs, you might ask how many classical musicians get to play or sing beneath quilts displayed on a canted ceiling that once protected straw? How many dairy cows have heard a harpsichord duo? 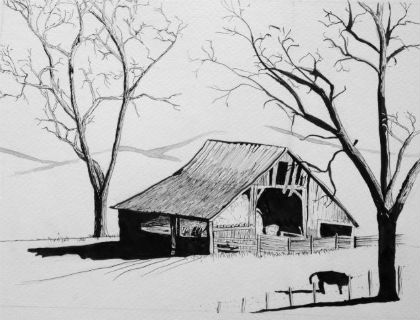 Back to Rt. 8, and we let gravity help us to Dodd Creek. It flows to the right, eventually passing the grindstones of Epperly Mill; then in a wide loop passing far below Annie Lane (from which it is visible only in bare-branch winter); then disappearing underneath the bridge over Rt. 221 S next to Slaughters’ nursery; then passing under the bridge of this same Highway 8, northern segment.

We pass a houseless chimney on the left, then Canning Factory Road on the right, and now two fully-loaded cyclists that can hardly budge uphill as they stick to the white edge-line like a tightrope. Just before going under the stone bridge of the Blue Ridge Parkway, we instead turn right onto that national artery, thus missing the down-the-plateau segment of Rt. 8, its hairpin curves more suited to Ferdé Grofe’s donkeys. Now headed toward faraway Asheville, we turn off in a couple of miles at The Saddle Overlook, Milepost 168, elevation 3388 ft.

To the east, Rock Castle Gorge. Far beyond the wraiths of former homesteads and settlers stretches the bumpy horizon. A little segment of both the northeast-bound Parkway and southbound Rt. 8 peek from amid the vegetation. Behind us on the west side of The Saddle is a vista of Buffalo Mountain, which in a hint of abracadabra can often be seen only from far away.

On one June 21 a group of celebrants gathered at The Saddle to watch the longest-setting sun decline to the northwest; the moon seemed to pursue it on the same trajectory, slow and soundless as it rose in the southeast. On another occasion a group waited for the “supermoon” to make an appearance.

“That’s Woolwine,” declared one onlooker. “See those two fields? My house is right between them. Those lights way on the horizon? That’s Martinsville Hospital” (in North Carolina, an hour’s drive from downtown Floyd). Like a heart-throb-of-an actress, the moon made a late appearance, then finally cast off a partial covering of orange to reveal its voluptuousness. As a dark cloud passed low in front of it with an amorphous, protruding shape, onlookers exclaimed “E.T.!” or “Mary Poppins!” or “Batman!”

At this outlook, hikers who take a loop trail go through an initiation by climbing a funicular-worthy path that leads to cabin-shelter. Jean Schaeffer reports that both belonged to the Appalachian Trail until 1954, when 160 miles of the Trail were moved to Giles County and other points west (Raised on Songs and Stories, p. 82). One group read aloud a handwritten note, left on a bench, that celebrated the rustle of wind in trees—when a kind of thunder roared down the valley off the cliff, prompting them to scramble to a rocky outcrop just in time to witness the last fighter jet of the group disappear on a level below theirs.

Kaisa and dog hiking the misty Saddle Trail with six legs and a stick. Photo by Kaila Jones, 2013.

Back to the Parkway and continuing south to Milepost 171.5, we reach the vicinity of Château Morrisette. Reliant on tourists that travel the 469-mile federal road, this winery and restaurant are both incongruous and welcome in a such an unsophisticated Appalachian province. (For an account of an almost unbelievable soiree, see Chapter 52.) 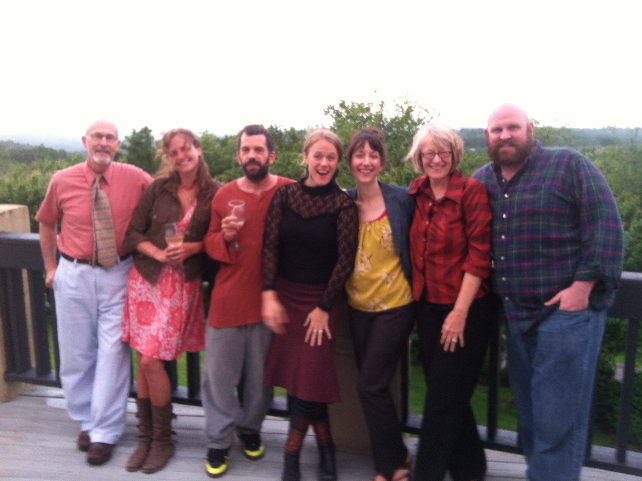