The seen defines the seer; the seer defines the seen. O reader fortunate! Your prophetic author, armed and eyed with the HaruSpex, apprehends the Bald Truth! 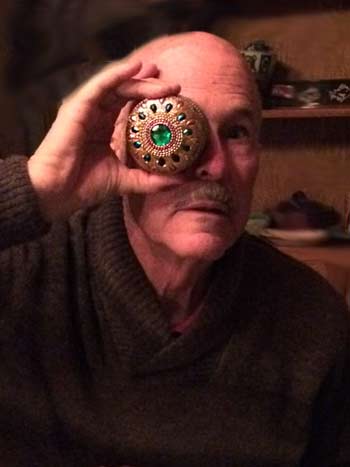 Granted, everyone perceives a different Floyd County. Little Margie Keith as she watches her father butcher hogs; a farmer attending with satisfaction as his tractor turns noise and grass to hay; a former soldier returning or settling; a tourist descending from the Parkway and passing a sample yurt, then an arty-dairy barn, then the relic of a water tower; an old-timer pulling turnips at dusk before they freeze; a driver zipping across one branch or another of the Little River to work in an adjacent county; a family drifting or paddling down the same river and encountering a party of back-to-the-birthday-suiters.

If you begin at The Stoplight and drive northward on Rt. 221, then make four left-turns, and don’t mind dust or mud on the vehicle, you will come to Anahata. (Not to be confused with Ananda Way, another Sanskrit borrowing.) Situated on thirty-five acres along the Little River, “incorporated as a church and education center,” it also considers itself a nature sanctuary (pamphlet). Its handsome lodge, built on a hillside, includes a large kitchen that displays this sign:

Observation without evaluation is the highest form of intelligence. J. Krishnamurti.

The essence of ephetic. Suspend judgment, take in all possibilities.

But the very singling-out of any phenomenon from the background–does it not constitute a judgment? Figure & ground, field & fountain, Observation drags along bias both personal and cultural, so as a person is rescued from a house fire, someone makes out the face of Jesus in the flames.

Explicit evaluation is the highest form of personal world-making. Writes Napoleon Hill: “Another weakness found in altogether too many people is the habit of measuring everything, and everyone, by their own impressions and beliefs” (Think and Grow Rich, 1937).

So to eliminate distortion in both observing and judging, your author employs none other than a touchstone of stones (photo above):

Its circumference bears eleven gems. This odd number is uncompromisingly prime, authentic, maybe idiosyncratic (think of Lords a-leaping). Even the word eleven is a sort of You’re Not from Around Here–unlike twelve, which builds on two, and ‘teens, which build on ten.

The set of gems, clockwise, counterclockwise, and both at once. Yet it complements the central jewel to form a concurrent, harmonious dozen. A Cyclopian zodiac? This even number, ten-plus-two, is multi-divisible, twelve being the Platonic egg carton,the Days of Christmas, and the ancient formula of knuckle-reckoning. In this early kind of digital computation, the index finger of one hand pokes the knuckles of the other one’s fingers: so three knuckles times four fingers equals twelve. Two hands = 24 bushels of Nile-swollen, Pyramid-building, wheat.

Here is the first in a series of seer-certified glimpses. Read and grow rich! 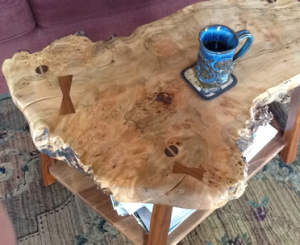 A three-year-old saw the new table created by Phoenix Hardwoods and protested, “It’s just a piece of wood!” Cup by Jayn Avery.

Dog must stay in. Photo by Fred First.

On the hill far to the north, a big patch of white flakes lay between dark forests. A cloud hastened across the sky, and as its shadow moved down the slope, it was pursued by a bright white avalanche of sunlit snow.

* On Canning Factory Road, whenever a vehicle nears Rt. 8 on a slight rise, the pavement seems to end at a hill and become a ramp that requires a good throttle-and-pitch to get over the pasture. 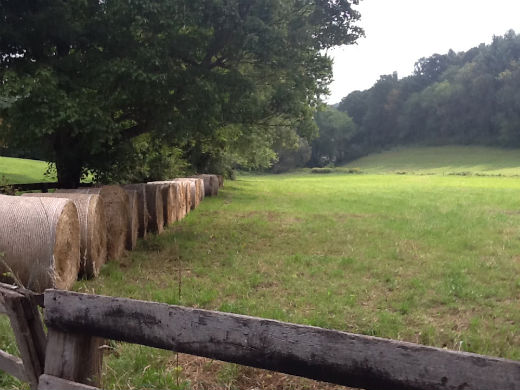 Randall was not the only one to spy an unusual tractor-trailer that laboriously turned into a parking area of a gasoline station, but he was the only one to hurry over (just behind his overactive nose). The trailer had two side doors at different places and was decorated with some initials and the name Shelor. Several guys seemed to appreciate his curiosity, and they answered questions with grins. How long? 73 feet bumper-to-bumper. How many cylinders in the tractor? Six. Isn’t that a bit minimal? It can go 130 miles per hour. What’s in the trailer? A racing car. Also a lounge with a microwave oven. They opened a door to reveal a red Chevrolet painted with the number 98.

We’re not in Florida anymore.

Statuette of golfer offering a bouquet.

Her son Wesley (b. 1977) uses wire to build such kinetic sculpture skeletons, then cover them with papier mache and a coat of paint. The peacock once joined a puppet show with a flamingo of similar construction. Wes has been doing such shows in Floyd for a decade, working with kids to make the puppets, write the jokes, and perform the shows. Magic Peanut Puppets has performed several Attack of the Killer Pipeline shows “to point out the folly of investing in fossil fool infrastructure in an age of global warming.”