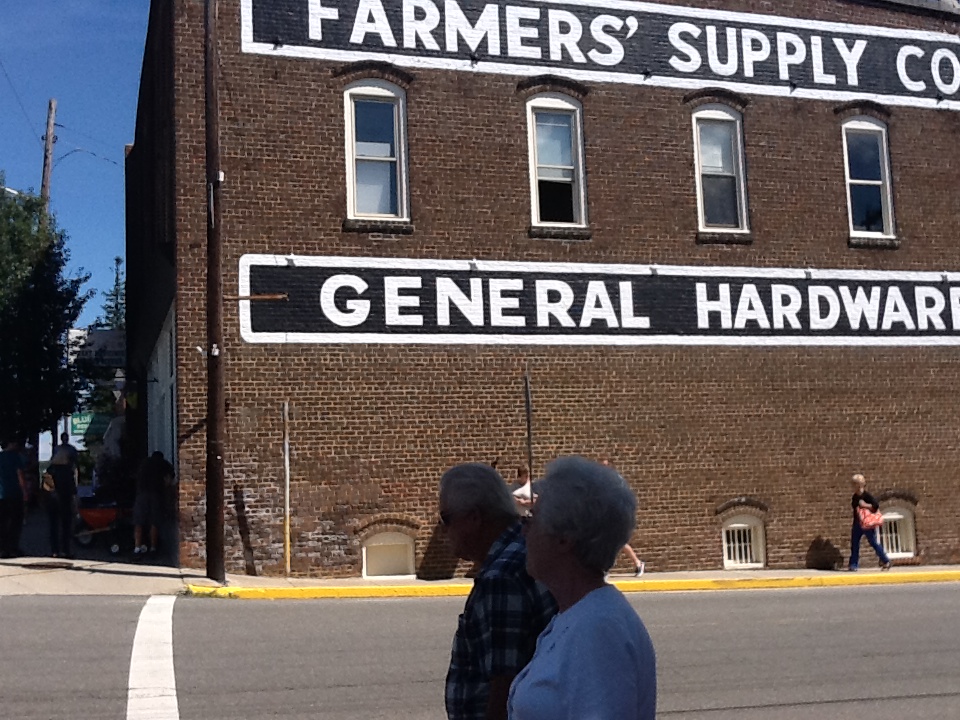 We parked on E. Main St., just past Locust St., up and over the hill from Gallery OneEleven, and right in the middle of a morning that was bright, cool, and autumnal. Five-year old Sidney ran past the Confederate Soldier–the boy who supplements his U.S. citizenship with Belgian, the man who renounced his. Two-year-old Julien followed as Alice watched it all from a front-loaded BabyBjörn carried by her mother. “Exit only,” read Sidney aloud at a parking lot, surprised at his new ability. Thus began a happy jaunt through town.

We turned at the county’s Sole Stoplight corner (see video clip above). 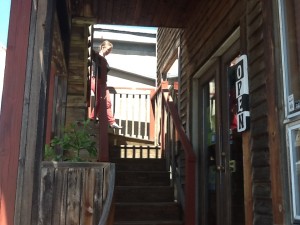 Ms. April descending from the Loft.

Passing Farmers’ Supply Corp., 101 E. Main St., I asked our oldest grandchild to look up at the foreshortened white letters: “We can read those from the cabin with binoculars.” Now four of us climbed, and one rode, up the twenty-five steps and two switchbacks to Black Water Loft. (This name confused us a little, for in the Lowcountry, blackwater rivers are tea-colored infusions of biomass rather than fluxes of brown mud.) Julien already snuggled in the lap of his father, who was working in his “Floyd office” composed of table, computer, earphones, and decaf.

I had first been there six years earlier. Marjory and our chauffeur Brother Greg had been sipping coffee in Oddfellas Cantina, discouraged after a cold, slushy, and fruitless search of either land or dwelling for retirement. The co-owner, Virginia Neukirch, had said, “Why not look at the real estate ads?” So I hustled down to Harvest Moon–later Black Water Loft and Notebooks–to buy a copy of the Floyd Press. Indeed, a tiny square of newsprint promised a view. So on the way back to South Carolina Marge and I drove up frozen and twisting brown ruts until they gave out, then left the car for the hostile March wind to abuse, marched farther up the machine-scraped field, and took in a down-and-up vista that ended only at the ridge of town.

In the loft I was able to name at least three of the McCutchan sisters, but today I confused the decaf latte with the cappuccino when I distributed them at the Country Store to supplement our lunch. Over sandwiches we watched a gallery of citizens pass by the window. The boys explored the aisles and found that they needed Sky Streaks–balsa airplanes with a red propellor and blue rubber band.

We gents moved on to the Warren G. Lineberry Community Park, where Sidney yelled, “Let’s race!” and sprinted down the handicap ramp, a purpose not envisioned by those of us on Partnership for Floyd who helped to transform the vacant lot to a community space. Then he urged his brother to try walking on rocks that lined a drainage ditch, angular stones that we would have called “jetty rocks” in the Myrtle Beach area. Then on to Grateful Bread, where Sid remembered that the owner’s dad had constructed the ovens. In a bag I now carried molasses cookies and a warm loaf of spelt toward the park. But first Sid had to roll down the hill upon grass cuttings, then grab his brother and roll down again as one unit as they clutched each other and laughed, while I pitied the hot dogs in their stomachs and wondered if this behavior was countenanced by the Park Plan. On to the boulders, where Sidney jumped off the big one and Julien off one of the small ones. Joined by Andrea and Alice, we all sat down to chubby cookies.

On the way up the hill we stopped to watch the stonemasons as they faced a column for the new all-purpose structure. One fellow, whose vehicle bore the license plate “Pilgrim,” gently cautioned us not to venture near: “This quartz is like glass.” Then he was thoughtful enough to climb up the lawn and hand each boy a rough souvenir chip.

That night the seven of us returned to town. Near The Stoplight I picked up some litter, a habit, while Marjory pretended not to know me. We threaded our way past sidewalk musicians, one group with a woman playing the bass, all Appalachian bragworthies, and made our way through people who listened on the sidewalk or half-walls. At a reception at Troika Gallery, we greeted the person who had taught Marge shibori at the Jacksonville Center (later the Floyd Center for the Arts) as well as numerous other acquaintances. Most were Came Heres or “Aways,” as one native calls them. Finally we would get one of the lamps we had coveted, fashioned by Susan Icove from parts of cast-off objects like pots and gears. Ignoring my “dumpster,” she preferred “upcycled.” 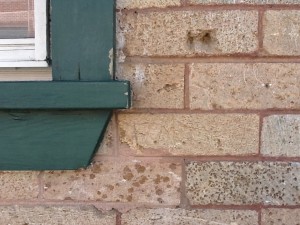 Next morning, Black Water again, where we chatted with daughter Katie’s fellow dancer as the espresso gizmo clunked and hissed. Marge took the grandchildren around the roofed-and-beamed Farmers Market. I arrived in time to enjoy some band-music, talk with a charming back-to-the-earth lady over her table of elixirs, relieve Marge of her bag of apples, and watch Sid wind himself around walls and railings with equal skill and zeal. That night Marge and I drove back to S. Locust Street and the JAX, where we had the privilege of attending a musical benefit offered by the Kandinsky Trio, which is in residence at Roanoke College (where my brother Greg worked). The classical selections were performed beneath ceiling quilts that graced the Hayloft Gallery in the former dairy barn–more than a touch of Floyd’s funklecticism. As for the audience, a typical member seemed retired and alarm-clock free.

At the reception we could admire Portrait of Floyd. My face hung on the wall, looking somewhat weatherbeaten, and Marge looked a bit severe compared to her typical sunniness. Hanging near me was baker Barbara with a plate of goodies. We all joined a sort of yearbook of photos: Fred and Ann First, a woman from Marge’s Zion Lutheran Church, and Theda, a McCutchan sister, who one morning had agreed to run down the old wooden steps of the Loft with me and have her picture taken by the sidewalk camera. Two of Katie’s friends looked out at the world at the same time they graced it. Rustic citizens were better represented on the walls than among the finger foods and wine glasses at the reception. One of the guests, Polly, was a farmer–but from Away, having grown up near Philadelphia. She runs a CSA (community supported agriculture) from which came a weekly bag of vegetables that went into the stew for grandchildren. (Polly’s spouse, Nii Anang, is the subject of Chapter 14.) The dish was supplemented by bubble gum purchased at the Country Store: 2-ounce, string-pull bags of Gold Mine Nugget.