Colleen Redman (b. 1950) writes and provides photography for the Floyd Press and other regional publications. She blogs daily at looseleafnotes.com. Here she recounts her coming to Floyd in 1985.

When Glen McClure was commissioned in 2012 to photograph Portrait of Floyd for a Jacksonville Center exhibit, I was one of the sidewalk subjects he put into focus. My photo came out looking more like the no-nonsense librarian that my high school aptitude test suggested I’d become than the back-to-the-land, flower-child, country transplant that I actually was. I was not transplanted from a city, but from a small beach town on the South Shore of Boston, an idyllic peninsula with dance clubs, an ocean-front amusement park, and a big Irish Catholic family that I never wanted to leave. But my first husband was out of work and his family (transplants from England) had found plenty of it outside of Houston. So off we went to Texas to make our fortune in the building trade, thinking we’d stay a couple of years. A couple turned into seven, and from there it was easier to continue to pioneer life as new settlers.

McClure’s assistant, who was working on the street, taking bio-notes for the exhibit catalog, must have misheard me. He got my comments right about coming to Floyd in 1985 to live a more self-sufficient lifestyle, for the alternative education choices, the beautiful countryside, privacy, community, and good water, but somehow the part about a U-haul and a first husband got misconstrued into me riding into town from Texas on a horse. It was actually a Toyota Camry.

Driving halfway across the country with my young sons, Josh (5) and Dylan (3), following behind my first husband in the U-Haul, I felt as if we were being lifted up by a great hand that was to deliver us safely in Floyd. As much as the move seemed pre-destined and guided, finding housing in Floyd wasn’t.

Our move to Floyd was sight unseen, but we had been corresponding with a couple of new Floydians and were particularly drawn to the county via an early version of “A Museletter.” This alter-native publication, distributed monthly for more than twenty years, had been sent to us by Bob Grubel of the Zephyr farm community. The national directory of Waldorf Schools listed Floyd’s Blue Mountain School’s parent-run-cooperative, so I wrote to the school, and one of the parents, Bob, eventually answered.

We stayed with Jennifer Siep and her roommate Motsy in their farmhouse for the first couple of weeks. I had “met” Jennifer via a letter she wrote in John Holt’s “Growing without Schooling” newsletter, describing how home-schooling parents in Floyd banded together to meet state requirements for home-schooling as a group. The group was the predecessor of today’s CERC (Community Education Resource Cooperative).

Our first visit to Zephyr was memorable because of the big welcoming hug that Bob gave us, which was not a common greeting in our pre-Floyd life. The women of Zephyr were more preoccupied that day, and there was little indication that they would eventually become some of my closest friends–sharing walks, tea parties, dance marathons, poetry, ceremony, life passages and child-raising. But our kids and the Zephyr kids hit it off right away, and they all remain close to this day, almost thirty years later. We surprised ourselves on that first visit by leaving them on the farm while we did some errands. Most everyone in Floyd felt familiar, and the whole experience seemed like an alignment falling into place, as though our destiny was almost recognizable and had already happened on some level. I remember saying, “It’s as if one leg was already here and I just had to pull the other one over.”

I hadn’t heard the word “hippie,” let alone seen one since the ‘70s, so I was surprised to find so many in Floyd who identified that way. Yes, I had been a flower child myself back in the day, but as far as I was concerned, “hippies” were from California. Believe it or not, it was a badge of honor to be known as a “freak” or “head” in Boston in the late ‘60s. We were not radical, but anti-establishment, maybe in an idealistic way, being awakened by the music of our generation and wanting the world’s status quo to change.

It wasn’t long before I was wishing I hadn’t sold all my gypsy shawls and flowing Indian-print skirts at our moving yard-sale in Texas. But this was the MTV ‘80s and I was a Mother Earth News wanna-be homesteader in need of some L.L. Bean work boots and jeans. Ironically, it wasn’t until I lived in Floyd that I wore my first tie-dye. Legend goes that our early source in Floyd, Kalinda Wycoff, learned the craft while living on The Farm in Tennessee. For years, she (who now owns New Mountain Mercantile) and others lived communally at The Mill, which I sometimes refer to as “our own Alice’s Restaurant” because so many community dances and events were held there. The three-story Epperly Mill [see Chapter 6] was also home to the community’s first food co-op, which eventually morphed into the the Harvest Moon Food Store [later site of Notebooks and Black Water Loft].

I read or heard a rumor once that the hippies who came to Floyd in the ‘70s and ‘80s were trust fund beneficiaries, but the majority of people I knew lived at or below the poverty line. That was the trade-off we were willing to make to be home-raising our kids, pursuing healthy, natural lifestyles, living simply (sometimes off the grid) with land stewardship in mind.

I cried when we moved into a large house under construction in Indian Valley because we couldn’t find anyplace else to live. It was a community-in-the-making with many acres of property being developed under the guidance of an Edgar Cayce-like psychic. But the owners had run out of money and my first husband agreed to trade rent for work. The kids and I hiked that property like Lewis and Clark explorers (before the deer tick explosion), and I learned pretty quickly that it wasn’t ever going to work for me to live twenty-five minutes from town.

It wasn’t unusual back then to knock on a stranger’s door and ask about an adjacent abandoned farmhouse. The families of these older houses had moved into modern brick ranches and would sometimes rent the old farmhouse for $100 a month. That’s how we found the “612 House” [christened after its road number]. The young man who farmed the land we lived on named his horse after our son Joshua. He invited us to church a couple of times and got rid of the rats under the sink (which I only knew were there because I could hear them squealing as they gnawed our potatoes). He let the kids play in the hay barn and get up close to the newborn calves. Because of an eventual divorce, I barely lived in the house that my husband had built off Christiansburg Pike [Rt. 615]. I remember walking up and down the long steep driveway in the snow after doing the nightshift as a B-REAL Ethanol Plant night watchman. It was understood that to live in Floyd I would have to patch a living together and learn to make something for sale or trade, which in my case was jewelry and, later, writing.

By the spring of ‘87 I moved out with the boys, who saw their dad most weekends. To save money, I opted to rent a big Cape Cod farmhouse off Route 8 and take roommates. One of them would eventually become my second husband, my one true love, Joe Klein, who was newly recruited from the D.C. area to teach at Blue Mountain School, where my sons attended and where I taught creative writing as a parent/teacher.

I have fond memories of the year we lived in the “729 House,” the changing roommates and college-like atmosphere. We were sad when the owners didn’t renew our lease. That summer we lived in a primitive cabin attached to a bus at Zephyr. By fall we moved into the “615 House,” which had great sunsets as well as an apple orchard in the back, and our neighbor landlords, the Grooms, became our friends.

In 1991, a local realtor who was a friend at the time, called me up and said “I found your place.” He was right. It was a cabin on nearly three acres off the Blue Ridge Parkway and within walking distance to Zephyr. The elemental quality of the nearby Parkway mountain-overlooks helped reduce some of my homesickness for the ocean. The boys had their own rooms and there was an organic garden to work. Owning our place–which I frequently refer to as a paradise of privacy– has been one of my best accomplishments, and I’ve lived here now longer than any house in my life, even my childhood home. 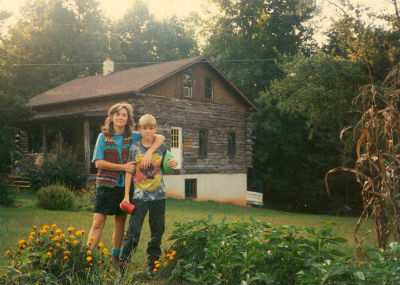 In the early days when the back-to-the-land artists were arriving in Floyd, newcomers and old-timers tended to be more segregated, but I think we had more in common than what was initially thought. And it had something to do with sharing an independent spirit as well as providing our basic needs (even our entertainment) in a homegrown way. But it was our kids who best bridged the community through the friendships they formed in school, playing on the same sports teams, dating, and sometimes even marrying each other. I think we’re all better off for it.

I came to Floyd looking to learn the skills to live a more self-sufficient life, and I did. We learned from the locals and from each other (trial and error). In some cases the newcomers may have brought back old traditions that weren’t being practiced anymore, as when my friends and I became interested in herbs and started wild-crafting local plants for medicinal remedies. Today, along with the garden, we have chickens and a hand-pump for easy well-water access. My husband keeps the shed filled with firewood and the freezer stocked with venison, which is my idea of being rich.

People are still coming to Floyd for the same and for different reasons. I joked the other day to a friend that the Floyd newcomers are old-timers now, as we are getting on in age. I think it was Catherine Pauley, a local Mountain Mother icon and high school art teacher, who, when asked what made a Floyd native, said: “You have to be born here or bury someone here.” It’s a line that chokes me up, and, having buried a number of dear friends as a community over the years, I understand its truth.

But I only just recently bought my first pair of quality mud boots. I couldn’t afford them for so many years. And last year for Christmas I got some zip-up coveralls. I guess that means we’re staying. I guess it means we belong, and that sometimes I even look the part.

For more of Colleen’s well-earned philosophy, see “Living My Version of a Successful Happy Life,” in Floyd Folks: Collective Wisdom from a (One Stoplight) Mountain Community, arranged by Tommy Bailey. Willis, VA: Free Range Press, 2015. Her volume of poems, Packing a Suitcase for the Afterlife, was published in 2017 by Finishing Line Press (FLP).

One thought on “45. Came Here VI: “Hippies are from California,” by Colleen Redman.”