The Sticks–a place includes anything from cornstalks to tree-trunks, cattle to pandas. It can be inviting or off-putting. During the Great Depression a hamlet outside of Chicago drew the parents of “Sunny” Bernardine because its cheaper land might produce food (Appendix 2). By contrast Margie Keith, although a native of Floyd County, found it an alien life to hoe corn, pick suckers, pull weeds, pick & can beans, pitch hay, and collect eggs. In the 1970s, however, Floyd County experienced an in-migration of back-to-the-landers. The term “hippies” does them some injustice, trivializes them, because groups came for various reasons and with a general resolve for a fuller existence. Jayn Avery describes herself as a Floyd artisan who, like many of those early Solstice gatherers, came to the area through connections made at craft fairs. She feels that making a living at her Blue Heron Pottery was a natural in these mountains of “do-it-yourself, independent, hand-workers.” 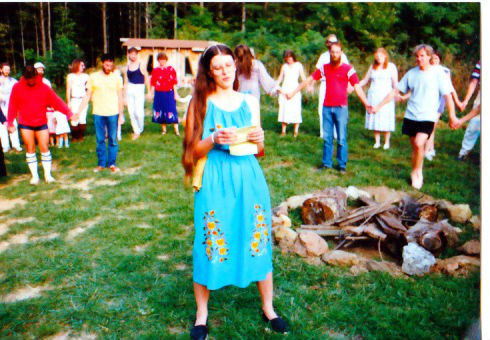 As I sat on the bank of the creek while keeping an eye on the crowd of little kids playing in the water, most of them naked or wearing panties, I nursed my newborn and felt truly at home. A Connecticut Yankee, having grown up in a world where I never felt I belonged, I could only smile at my fortune. Home–Virginia? I could not have imagined living this far south and still wondered at the naturalness of the experience. And I was not alone. The small creek, which was the beginning of the Little River, was flowing gently with its wooded banks next to a large field where people were gathering for the Summer Solstice of 1981. In my hand-made long skirt and blouse, I blended with the textures of leaves that filtered the warm sun as I watched how the children splashed in the waters while exploring the rocks, mud and each other. Life in this new world we had discovered was an unfolding mystery.

It was the ‘70s and ’80s when a number of “communities” established their unique selves in Floyd County. People of common mind and few resources shared the cost and responsibility of land ownership based on different ideas. Some with family ties, some with simply a brief encounter with strangers, all knowing in their gut it was the right thing. Most were not even from Virginia. Massachusetts, New York, New Jersey, Pennsylvania, and the Carolinas were the most common origins, something I learned as I got to know folks. What all of us young people knew was that we had found the place to live an independent, soul-centered, back-to-the-land life.

The first gatherings for the celebration of the Summer Solstice occurred at Travianna, a family based community whose founder, Ruth Bason still blesses us with her presence today. [For an appreciation of Ruth, see Jack Wall, Chapter 36.] It is her son, Will, who coined the word “Alter-Natives” to describe us. Their land, in the northern part of the county, was not far from what had been the first community called Hanatuskee. [Chapter 38.] When I learned that this Native American term for the area meant “land of many nuts,” I had to laugh, although of course it referred to the chestnuts. When my partner and I moved here in 1980 with our two young daughters, the gatherings took place in that large field by the Little River near the Riverflow Community and surrounding neighborhoods. That community had been established in the northeastern part of the county, where a large number of like-minded people who had become neighbors and organized the space for parking and gathering as the ceremony grew in size. [Riverflow was located on Dobbins Farm Rd. NE, just downstream from the present Anahata.]

It was at the solstice assembly where I was observing the kids that I saw a family wander in: little twin boys walked next to their dad as their mom held a toddler. I felt an immediate kinship with them. Katherine and Ray would become future members of the Zephyr Community, which we began together with Tom, another person we met there by the Little River. Many drawn to these gatherings were visiting friends and would soon find their homes here. It seemed there was some magnetic energy that pulled us all together, for as we met it was as if we had always known each other.

Over the summers those gatherings built up to over two hundred people. Some folks got into wild volleyball games. Others played in the river with the kids or created games on the field. As we stood in the ceremonial circle holding hands and singing, we had a common recognition of the sacredness of this Earth and our responsibility to honor and protect it. We had to laugh, however, as it became harder to keep up the singing in such a growing circle because one side could not hear the other and we could no longer sing in unison. It seemed we were outgrowing ourselves, so the focus started to shift to the individual communities as they began to find their own character. Time moved on and our paths separated into lives of different character, yet the connections remained, especially that fundamental understanding of our relationship to this Earth.

Like most of the Floyd “newcomers,” we at the Zephyr Community [located on Zephyr Cir. between Roberson Mill Rd. SE and Hope Rd. SE] felt drawn to various Native American and ancient Celtic traditions. For example, we laid out a medicine wheel at the center of an open field that stretched above some dwellings and a newly established orchard. The wheel became an important part of our rituals through the teachings of Sun Bear, a Native American who became a national figure as he led a movement to teach the ancient traditions to those of us non-natives who wanted to learn. Laid out in rock upon the ground, the circle defined a sacred connection to spirit. Once we found the right place for us on our land, we gathered some rocks and set altars in the four directions. For many of us, honoring the sacredness of the circle was perhaps the most meaningful shift in our thinking from the Jewish and Christian traditions we had been raised in. Honoring the spirit in all beings, whether a bug or a bear, felt resonant with our relationship with this planet. It became a natural step to celebrate the Autumn Equinox in our medicine wheel. The ceremonial focus of that event drew many who were losing interest in the big party that the Summer Solstice had become.

On that day, provided it wasn’t raining, we would invite a people to circle the rocks that defined the medicine wheel, then to pass the smudge bowl while someone beat a native drum slowly and softly. Smudging is an ancient cleansing tradition: a person has a cloud of smoke wafted over their head and around their body from a bowl of smoldering herbs like dried sage. Just the smell can put someone into a quiet space of focus and sacred presence. Incense has its origins in other traditions for the same purpose. While I was enclosed  by woods whose leaves were just beginning to change into autumn tones, by the browning of mature hay, and by the rich texture of earth and sky, I felt as if I was standing in Nature’s cathedral. My new awakening to feminine spirituality was being inspired by the simple resonance of standing in a circle with my feet firmly placed on the ground and my head warmed by the sun while surrounded by brothers and sisters of my heart.

The ceremony was simple. We opened it by honoring the four directions: everyone faced east and the element of air, then south (fire), west (water), and finally the north (earth). We would sing and chant whatever anyone was inspired to initiate and then we closed the ritual by holding hands and honoring the circle we were all a part of. Afterward,  we would join together in the yard behind my house and have a congenial potluck dinner. As years moved on and little kids got more involved, we shifted to celebrating in a makeshift medicine wheel we set up in my back yard. It was the best open flat location on our property and didn’t require the upkeep. We continued the practice of holding sweat lodges and moon lodges—all traditions passed down from the medicine men and women who were inspired to do so.

Later, as we created Blue Mountain School and hired our first teacher, Alwyn Moss, we learned about the Winter Solstice Spiral from the Waldorf Education tradition, itself  based on an ancient Celtic ceremony. We did that at the school for many years and then carried it on at Zephyr. For a number of years a few of us would also do a Summer Solstice ceremony on Buffalo Mountain. In 1994 I was a part of a group of women in Floyd County who had the incredible opportunity to go to Chile and study with the Machis (medicine women) of the Mapuche—the natives of that land. We would honor our connection with them for years after by going up on the Buffalo and “drumming back the sun” on the Spring Equinox.

As age and the needs of work drew our energy and attention, we have drifted away from many of these rituals. It fills my heart today to see their re-emergence initiated by the next generation, who have come to recognize the sacredness of this earth and our need as human beings to nurture that bond in our own ways.

The following are verses from some of our songs:

I am a hollow bamboo
Open up, let the sun shine through.

The river is flowing, flowing and growing

The river is flowing , down to the sea

Mother carry me, your child I will always be

Mother carry me, back to the sea.

From you I receive
To you, I give
Together, we share
From this, we live.

Fly like an Eagle
Flying so high
Circling the universe
On wings of pure light.

See also Jayn’s celebration of her house in Chapter 31 (“Solid Geometry”) and of pottery-making-acoustics in Chapter 33 (“Sounds”). For her autobiographical-educational-ceramic journey, see “Getting Grounded,” in Floyd Folks: Collective Wisdom from a (One Stoplight) Mountain Community, arranged by Tommy Bailey. Willis, VA: Free Range Press, 2015.