The author, Shayley Martin, is the daughter of Lydeana, the Director of Community & Economic Development for Floyd County; and Charlie, a registered nurse from whom she gets her creativity, according to her mother. Shayley enjoys writing, cooking, and “being a Presbyterian.” An ace local-color writer, she also keeps a food blog, thecornucopiacook.wordpress.com. Other mental nourishment includes linguistics, and more than once she has reached the semi-finals of the National Spelling Bee. In 2014, as a fourteen-year-old, she spoke with her maternal grandmother, Willadean Hodges Hylton, who was born in 1936, the year the J. Freezer & Son building was constructed and seven years after Margie Keith was born. Like Margie, Willadean was raised in Willis. The subject of this interview-story was Grandma’s years spent as a worker in the shirt-and-then-blouse factory reconstituted in Chapter 10. 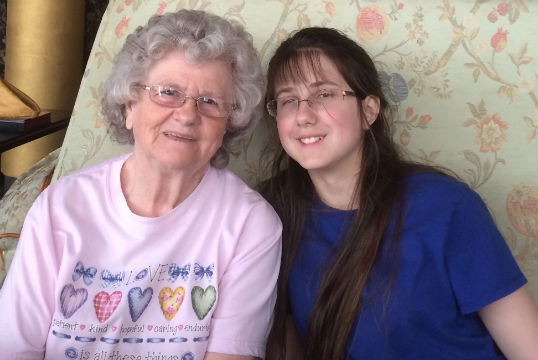 “Grandma, did anything weird happen when you used to work at the blouse factory?” I ask this question of the short, pleasantly stout lady who was born during the Great Depression. Asking for hard facts will work for some interviewers, but it will send me home empty from Grandma’s trove of information. I am more likely to hear a dozen anecdotes than The Day She Started Work and That Was That.

“Oh, I couldn’t tell you much about that,” she says. I don’t say anything for a while; I am waiting for the flow. “Well, the man running it was Mr. Thornhill, and my boss was called Dewey….” I scribble furiously for several minutes as she speaks, and she occasionally stops to assure me that she doesn’t have much to tell. I nod and wait, and pages fill. I write that Willadean began pressing and folding shirts at the Floyd shirt factory in early 1953, when she was sixteen years old and recently married.

“Well, I’m not really fishing for shirt factory stuff, but do you remember anything from that?”

“Gabardine,” she announces, and I briefly think it’s a name. No, she says, it was a silky fabric and the enemy of all; it ripped and stretched and got caught in machinery.

“Gabardine,” I repeat, tasting the word. “It even sounds evil.”

She was laid off from the shirt factory on her birthday in September of 1953, and the business closed down that December. Thus a brand-new blouse factory was born in the same building.

“Coy [her husband] was working at the sawmill,” she says, “but there wasn’t much work with that in the winter. So I worked there [at the factory] for some of my own money.” Coy went on saw-milling until his death in 1996.

The hours were 8 a.m. to 4 p.m., with one morning break at ten, which she didn’t take, and a lunch break—mandatory to avoid shelling out extra. Grandma worked several stints at the blouse factory, one for eighteen months, the rest for two to three months at a time. Many of her friends and sisters worked there as well: one friend for three weeks, another for twenty-six years.

Grandma recalls the central tenet of Coy’s advice, maybe a little too late: Don’t work there if it runs you in the ground. The factory rarely closed for bad weather, and one snowy morning she and a carpooling friend slid off the road into a ditch. But that is probably not what he meant.

Responsibilities varied: the blouses were cut by layers with a saw, then transferred to an inspection rack where, according to Grandma, “Sometimes they let dirty ones get through, which wasn’t right.” They were then pressed, folded, wrapped in a cellophane-like material, and placed in boxes that seemed to Grandma like “big shoeboxes.” Before they were shipped out, every stray string was clipped. Or at least in the case of the samples.

Grandma languished in the folding and other departments, where she “never did make production,” the suggested rate of output. Although those who exceeded production were paid extra, those who fell below it weren’t paid less, just hounded a little by the boss and those down the line. Some fussed at her meticulous slowness, so a friend transferred her to boxing and bagging or sometimes sample work, which required the attention to detail that brought down her speed in the other jobs.

“The samples, now, they had to be perfect,” says Grandma as if conjuring in her mind the image of rows and rows of neat folds, “and we packed them special, so they wouldn’t get wrinkled.” She describes the very specific layout of a long sample box. Collar to side? Button to button? Collar to other side? Side to side? I asked her to repeat, but the sad fact is that I will probably never understand. The pressure was still on; this work made her nervous.

“But did anything weird happen?” I persist, as though my original question were all I wanted to know. Grandma thinks about it. I’ll try to replicate her words pretty nearly here. “Well, there was a lady that come in wanting to work here, and the boss, Dewey, was asking her some questions. I don’t know how he figured this out, but he had a suspicion, and he said, ‘Are you pregnant?’ ’cause he didn’t want a pregnant lady working there. And I guess she didn’t want to admit it, so she said, ‘Well, I think I’m getting that way.’ And it was all around the factory by dinnertime” (lunch.)

At last the factory rattled Grandma’s nerves too much. Instead of the stressful job of blouse manufacturing, she took up the much easier job of visiting sick people in three states, cooking enormous breakfasts for hordes of saw-millers, and raising a family.

“Did you hate working with fabric after that?”

“No, I still made quilt patches for a good long while,” she replies, “like the Dutch Girl pattern.”

Something hesitates in her voice when she tells me you know the girl on the quilt is Dutch because of her bonnet.

“So none of this soured you on fabric, or blouses?”

She smiles. I notice that she is wearing a sweater.